I was recently given a guided walkthrough of Montgomery College’s King Street Gallery by Megan Van Wagoner.  As it was my first visit to the location I wanted to provide a brief overview of my thoughts on the gallery itself as well as their current installation, the collaborative works of Mariah Anne Johnson & Mei Mei Chang.

A unique piece of its own, the King Street Gallery is a miniature labyrinth of exhibits adorned with artistry.  Every time I turned a corner a new piece was waiting for me.  It added a feel of discovery to the experience and prevented me from taking in the entire exhibition at once- and in doing so flattening it.  The team behind the King Street Gallery have organized the space into zones each of which can be dedicated to a different artist.  Again, this structural decision has a distinct effect on the art.  It adds an overall sense of progression and almost storytelling aspect to the space and creates a unique relationship amongst the artists that are paired together.  What’s great about this layout is it’s not restrictive.  When exploring the space you don’t feel like you are forced to continue moving forward and work your way out.  On the contrary, throughout the space there are L-shaped walls and glass panels that give you a glimpse of works that you have previously visited or haven’t yet reached.  It allows you to see each individual piece from several perspectives and makes your progression through the space a far more circular experience.  As I said before, I truly felt like I was exploring the exhibit rather than passing through it.  I felt engaged. 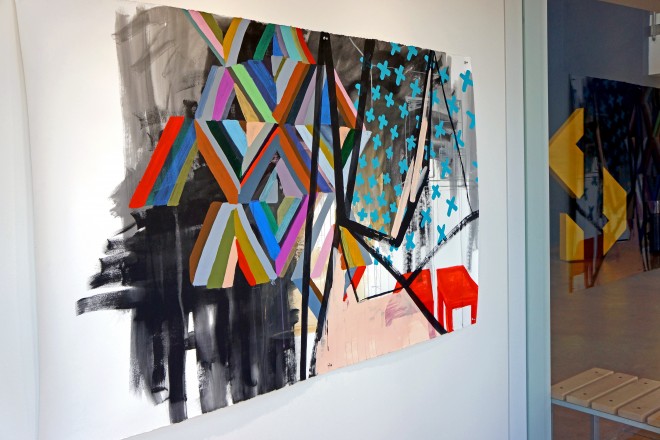 Due to the layout of the King Street Gallery you are never viewing a single work at once, nor a single artist.  As mentioned this layout lets you see each piece from several unique perspectives. It also creates a unique relationship with the work of the various artists.  When you look back at a previous piece in the gallery you are seeing it not only from a new perspective, but also in new context.  Seeing one artists work becomes a completely different experience when seen from a new angle surrounded by the works of another artist. 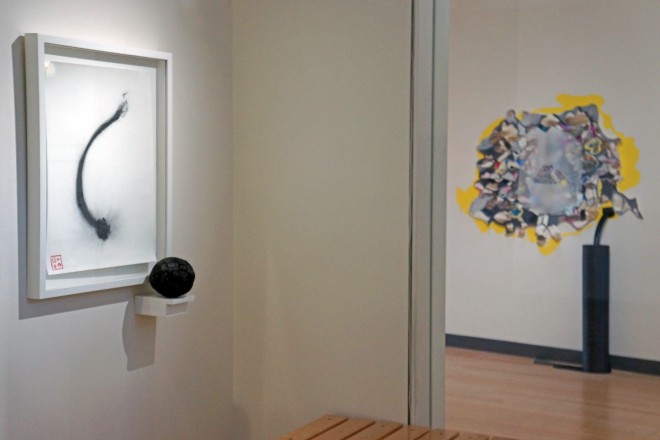 In case you wish to hear more on the gallery and exhibits I will insert segments from my walkthrough with Megan Van Wagoner.  Below she shares an overview of how the gallery curates its artists and exhibits.

The team behind the King Street Gallery have taken this concept and pushed it even further.  The Mariah Anne Johnson & Mei Mei Chang exhibit breaks down the typical, linear gallery structure and creates a space where one artist’s work spills over into another’s. The viewer is carried through by common themes and the motion of the pieces. 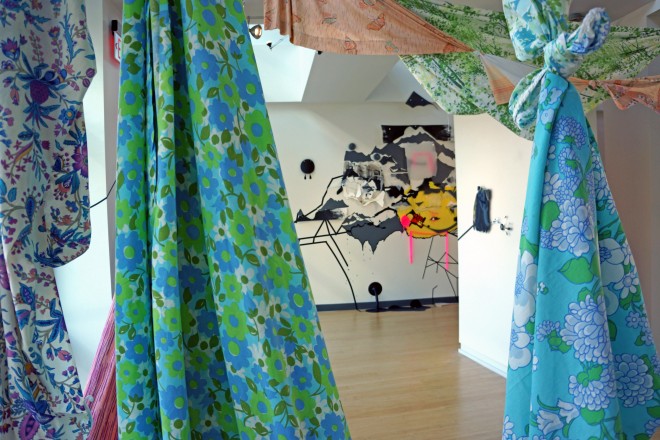 Megan Van Wagoner describes how the exhibition came together and how the artists used the unique space to layout their exhibits:

I’m going to keep my thoughts on the exhibition relatively short. There is a lot of good material in the audio interview that I will pair with some images from the gallery.  I also want  you to visit the exhibit yourself and form / share your own opinions.  But just for some context, here is a general overview of my thoughts on each artist:

This was the first artist, whose work was visible from the entrance to the gallery.  As described by Megan, Peter Quinn creates his work with impact marks from these large charcoal spheres.  His work has a captivating sense of movement and elegance to it and is almost like a type of calligraphy.  It was interesting to have the spheres paired with the works they created.  I really enjoyed examining the charcoal spheres closely and seeing the light refracting fragments within.  You could then look at the paired art pieces and see the same effect. 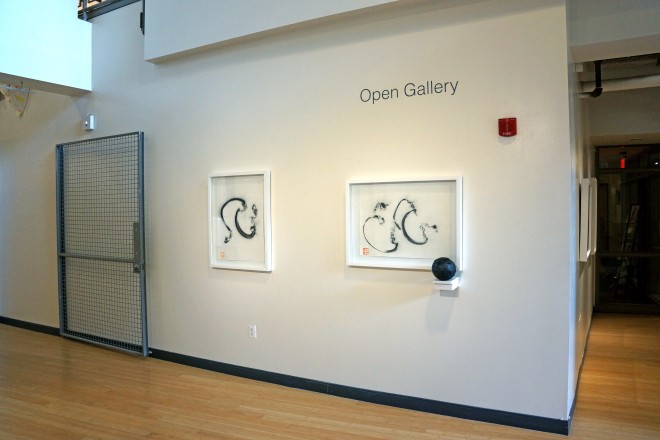 Peter Quinn’s work was a great introduction to the method of storytelling that carried one through the exhibit.  His pieces were full of movement and the elegant black lines would become an important theme throughout the rest of the installation.  His is the work I recall the most as an example of the sense of evolution within the gallery.  At the beginning his work was simple, but elegant.  Just black and white.  There are points where you can look back to his work through the filter of Mariah’s and Mei Mei’s or even paired side by side through a window. His pieces stop being an lone item on the wall.  A piece within a vacuum.  It takes on more of  a role as the origin of this artistic narrative.  As if his charcoal spheres traced their movement on his work then continued rolling through the rest of the gallery.  Or maybe they started at the apex of one of Mei Mei’s structures and finally came to rest on their current pedestals? The story after all is cyclical. 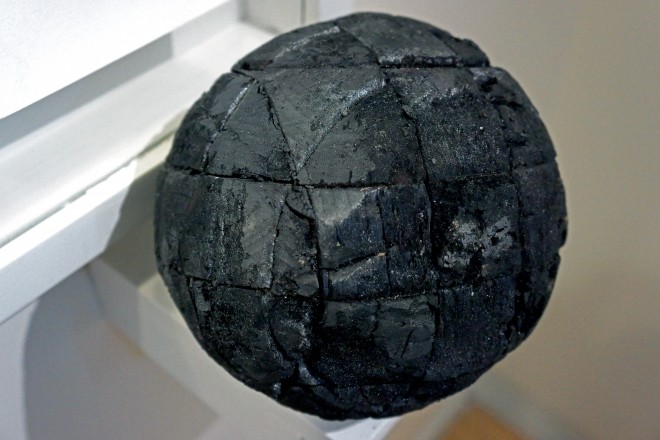 Mei Mei’s Chang is the artist whose work I connected with the most.  I was immediately drawn in with the abstract narrative and dreamlike environments that her work seemed to be creating.  Her work had this almost pointillism like quality where the various mediums and textures she used mixed and builded on one another to create something greater.  Her central piece had a very strong presence that felt as if it was stretching off the wall and throughout the room.  Her work evolved as well.  At a distance it was a web that tethered all the other sections together.  The tapestry or frame on which the other pieces resided.  Up close I examined it as if peering into the scene of a dream. It reminded me of the sensation one has when waking up and trying to hold onto the details of that world you were inhabiting just a moment ago.  Structure and views that exist in the minds eye, but crumble when brought out into our world. 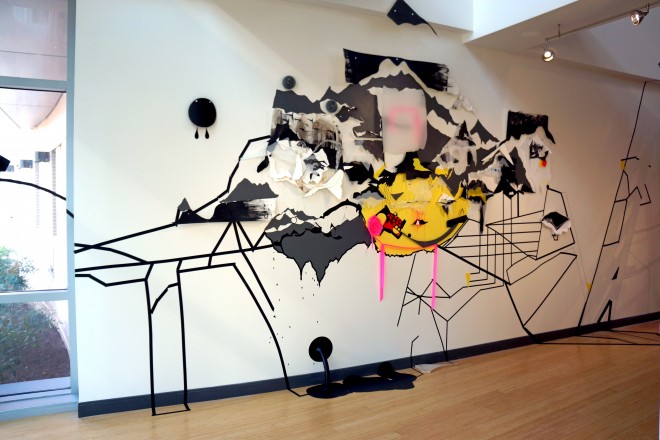 Megan and I speak a bit about Mei Mei’s piece.  It was one we returned to frequently: 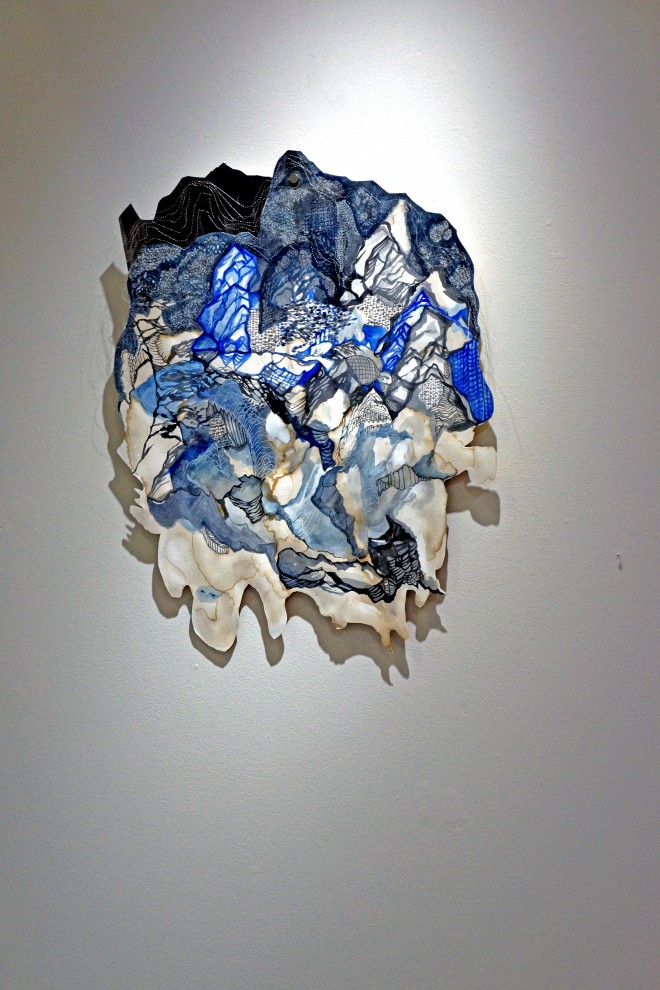 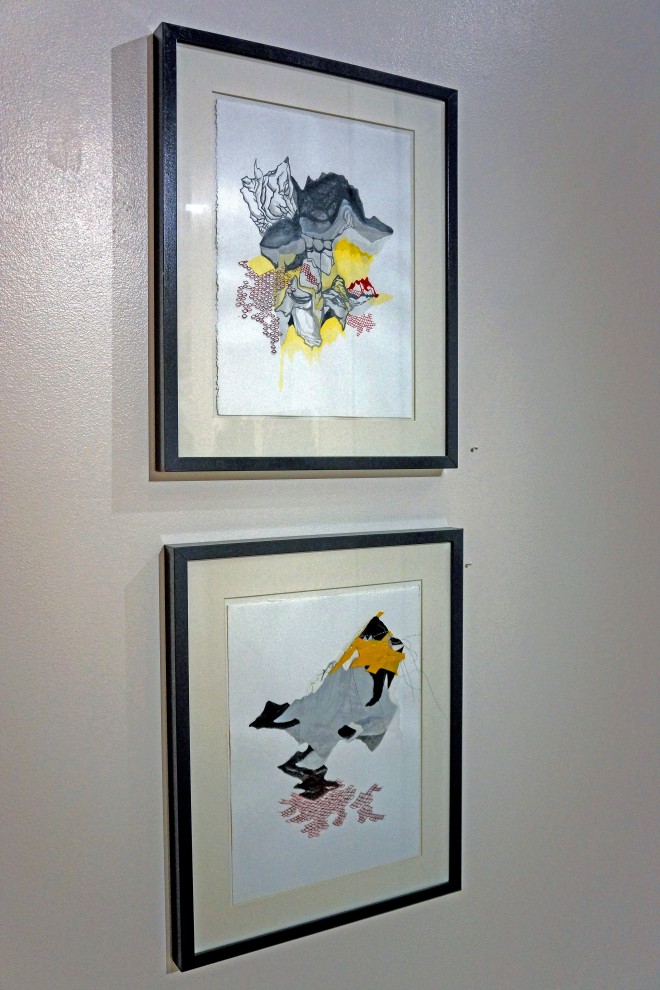 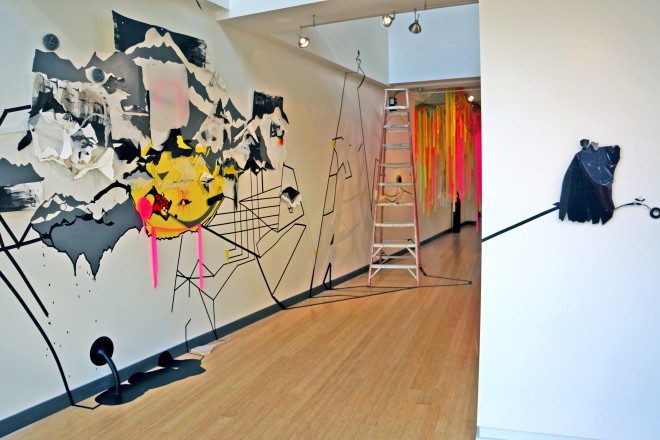 In all honesty Mariah Anne Johnson’s work is one that I gained appreciation for, but didn’t necessarily get right away.  Initially her pieces felt more out of place. Like found-art or performance pieces amongst those that were abstract but focused on movement and still had a specific composition.  However, after Megan’s explanation of Mariah’s artistic style and further exploring the installation I understood it better. Seeing her work paired with other artists and even her own paintings allowed me to see it in a new light (as the artist intended). Mariah’s work contributed a great deal to the overall tone and feel of the exhibit. Her installations created a very physical sense of exploration as I moved through the hanging sheets of one section and peered at another artist’s work through hers. Viewing each piece through a specific vantage point, one that added an additional layer or chapter to the narrative.

Mariah’s sheet work was particularly fascinating to compare against her paintings.  Seeing the same style attempted through different mediums gave a great appreciation for the use of space and dimension in an artistic composition.  Her sheet work had great depth and could be approached from and endless array of angles and distances that changed it each time.  Her work created the feel of a colorful jungle canopy, something you could get lost into as the light reflected off of the pieces and the individual patterns melted away. 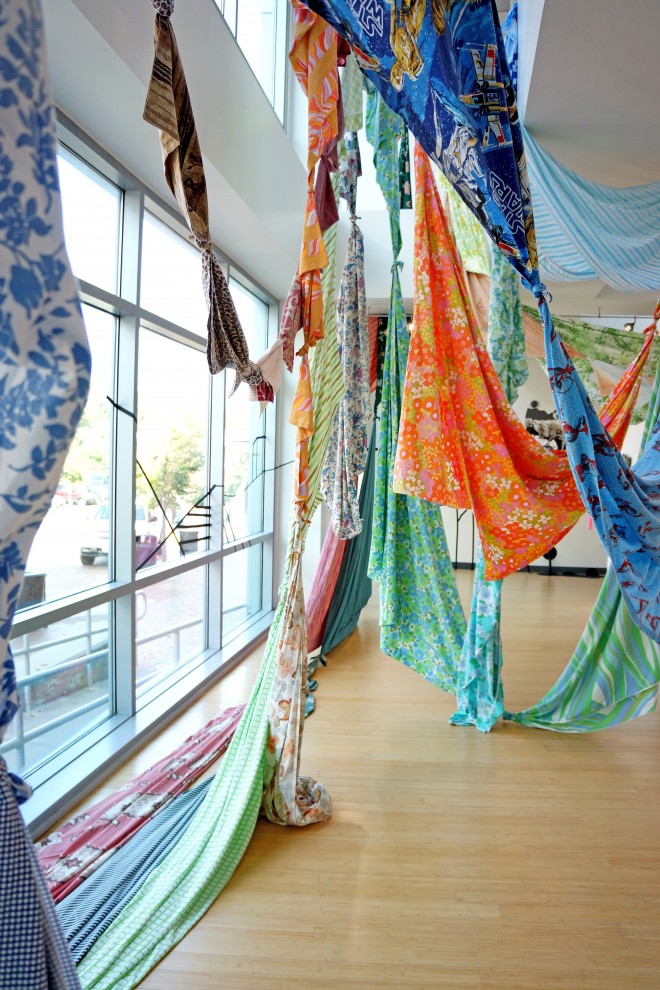 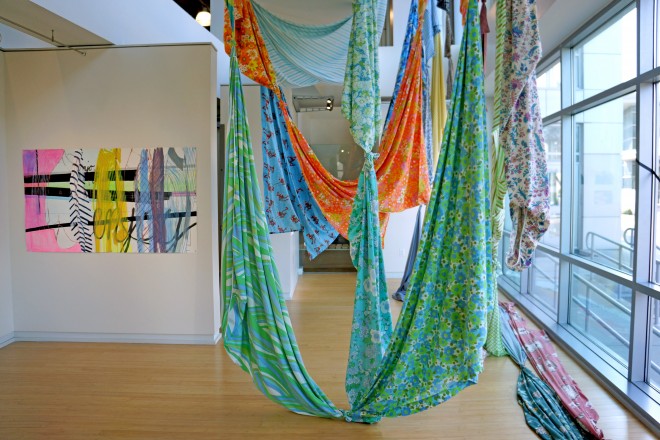 Mariah’s paintings compared to her sheet work. A similar style in different mediums. 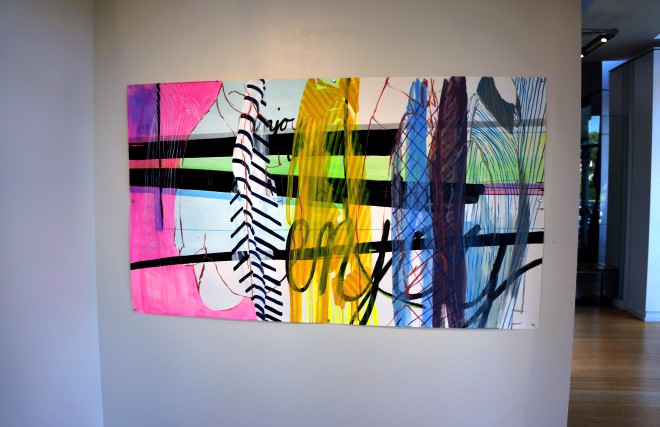 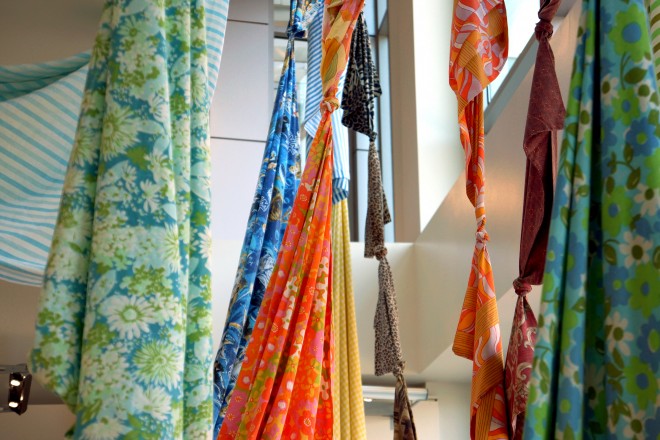 Overall the installation was thought provoking and engaging.  It is one that I would encourage you to experience and spend some time with.  The same could be said for the King Street Gallery in general.  It is a space that I look forward returning to.

Mei Mei Chang & Mariah Anne Johnson’s work will be on display at the Montgomery College King Street Gallery through October 16th.  The gallery is located on the Georgia Avenue side of the Takoma Park/Silver Spring campus.  There is a parking garage where you can acquire a visitor’s pass for free, but the gallery is also a short walk from several Montgomery County Garages including near The World Building on Georgia Ave.  For those up for a longer, but still reasonable jaunt you can get to the gallery from the Silver Spring Metro station.  This is the method I used and on a nice day it was great. 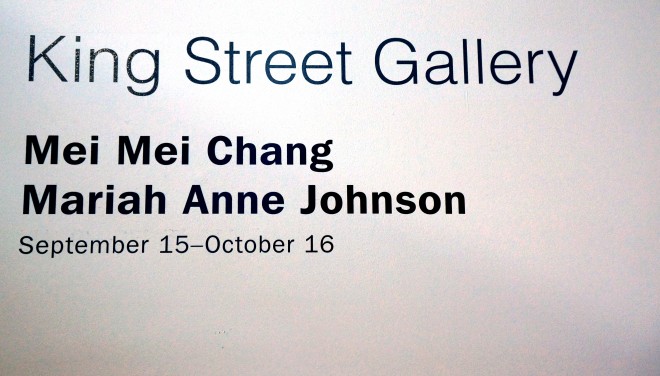 I am part Dramatic Writer, part Forensic Scientist, a bit of a Jack-of-all-trades and all child at heart. I joined Silver Spring Inc as Content Manager in June 2014 and haven’t stopped smiling since. I’m passionate about movies, nostalgia, meeting new friends, making people smile and helping them accomplish their dreams. As a newcomer to Silver Spring I just want to keep watching and see where it’s going. From an outside perspective, it was clear upon moving here that there is something very special happening in this city right now. It’s my mission to help the Silver Spring community continue to grow and enjoy the ride.